It’s funny finding yourself unexpectedly to produce “art” (or for whatever that is conventionally defined to be).
One day you are hit by an intuition and you start investigating your idea of Beauty like it was the most common thing you could do since ever.

Even if you never even thought about becoming an artist. Even if you not even have done art school. 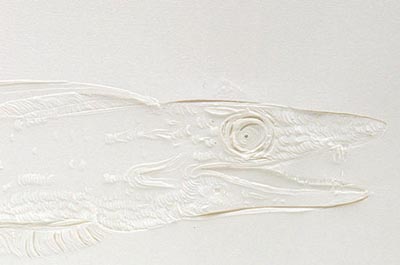 Here and above: Ellen Gallagher’s artworks.

To me, it happened in 2013 during Ellen Gallagher’s solo exhibition at the Tate Modern in London. Her latest work, paper carved to represent oniric fishes and seaweeds, hit me like a revelation: this concept of white on white, of carving instead of sculpting, would have made me to surpass my incapability of painting and use of colors – that was too much related to my User Interface/Graphic Design job – putting me in crisis, everytime I wanted to have fun just for the sake of it.

So, to avoid copying Ellen’s works, in october 2013 I started crafting birds. I started by several hummingbirds and then I felt in love with carving feathers. I began donating them to friends as gifts or cards.

And then, it’s the moment when everybody starts to tell you something you’re not ready yet to listen. Then is also when – even if you couldn’t even imagine it – the Universe has plans for you.

Turning upside out your life, step by step.

step 1
The first quest that you have to pass are your friends: see the expression on their faces and listen to their compliments but you do not trust it because you think that what they say it’s only because they’re your friends or family, and that they love you.
But by now the seeds are irremediably inside, and wondering begins.

The second one it’s asking opinion to people dealing with art market. For the three to whom I asked, was better to give up or try into gadget industry. So it’s what I did: I trusted and I gave up, letting more than a years pass away… Carving just for hobby, just now and then. Besides, crafting big size paper («Bird Series»‘s detailed feathers needs at least sizes from 35×50 cm) was complicated because I don’t have appropriate room for it, making it annoying set everything up everytime. Meanwhile my path to become sound healer took priority on that of art.

But still, the sensation of my first good work, the «Paradise Bird», was floating inside. I could describe it like something special occurring… like surrendering to something and feeling an emotion of beauty inside, letting the hands going through without a clue of what would it be at the end. But I wasn’t satisfied with the other Birds.. something was missing and I didn’t understand what it was… So, one day at the beginning of 2015 I decided to quit birds and I started with a smaller and “practical-to-be-set” format: it’s when my series of abstract started with «Quasimodo Remixed #1». I understood what I was missing: I was concentrating on the technique but I was forgetting to let inspiration would move me: it’s poetry what it was missing!

step 2
This is when you undestand that you have to quit thinking with your brain and start perceiving with your feelings, with the heart. Something changed and my technique began to get better and better. And I started to enjoy my work, also: I started investigating different kind of blades and their results. My art became vibrant.

My preferred compliment has been: «Domitilla, where the fuck have you been so far?!» … complete & concise, indeed.

step 3
Then it’s when the above-mentioned seeds sprout into precise questions.
Pain in the arse begins and you can letterally hear the Universe having fun at your back while you struggle into your soul.

Infact, actually, «Where have I been so far?» becomes the question which started to resonate inside me.
I remember I liked so much dealing with paper and handcraft, since ever. Before that computers swallowed creativity into productivity, there was a moment when you could still nourish with pre-production handcrafting activities. I realized that it was what I missed much in my job, and that was making me suffering since a lot more than a couple of year.

But untill you won’t arrive at the final appropriate question, you’ll turn around and aroung, giving in and out, loosing yourself into quotidianity… And the appropriate question to let you go further is: «Where the fuck I want to be?».
It’s a quite difficult question to listen to if you have been in the place that you’ve choosen since when you were a kid, enjoying it for almost 20 years, and you don’t undestand why suddendly something is not working anymore.
I focused on this, after a finally very hard year, during which I overturned myself to understand once and for all. Thanks to  instruments I acquired during the path to become a harmonic sound healer, I finally managed to arrived to get the answer.

step 3
The other phrase which resonated inside me for months was the title of the book of a young – but very wise – calligrapher, Luca Barcellona, which titled «Take your pleasure seriously».

I love what I am, and I am in love with Harmony in sound and Nature, expanding my consciousness and expressing my creativity through the body. This is all I need to do to be happy and when you are you feel you want to share and spread this special energy/feeling to the world.

This is the direction which my life would have taken from 2016 on, to make myself aware of taking my pleasures seriously. So I decided to seriously dedicate some time to end the 2 series of «Remixed Poets» and finally finding a way to properly photograph them and preparing the website to see if in this big big big world out there there could be a niche that would have let me do what I love to do, and earning a living.

It took 2 months to do all this. Being a graphic designer it made me being very pretentious on how pictures should look and the look&feel of the website also…  It’s when I realised it was becoming a limit and gave it up that finally the web site saw the light, on the 25th of May. (I’m still struggling with WordPress and I’m not satisfied at all with pictures because to show the bas-relief that light creates, the beauty of white is lost  into a greysh mood.. but oh well! I’ll survive. I only hope this won’t create false aspectations.)

step 4
So, when I’m at the point to be ready to spread my name through the web, the third and biggest query hit me: a very kind editor to whom I submitted my portfolio made me aware of the existance of french artist – who already solo exhibited in Paris – and her extremely similar artworks. When I saw her works I was astonished: same cutting details, same ideas I had of how to introduce colors, same results I was chasing.

Then «God: why now?»
But here is when the Universe reveals its incredible subtle plan.

Plato and the ancient greeks were awfully ahead.

Thanks to the existance of L.C., I got the (third and last) proof of what being “artist” means: you’re just simply an antenna, enough perceptible for receiving a gift from “somewhere over the rainbow” and transform that special energy into matter, with the aim of moving people’s souls.

It’s incredible how the two of us have both been inspirated by the same idea of this technique, same year (gosh luckly me I found a fortuitous post of a detail of my first work dated 2013 on my – usually deserted – old tumblr) and same ideas of using colors (despite my husband was thrilled, I discarded the black version 2 years ago, but I was about to test the use of watery pale colors during this june in exactly the way she did).

So, I think it’s statistically impossibile we’re only two of us on earth. I reckon this “poetry of paper” through carving will give us some surprices again, and in the same way that I never met a work of L.C. on Pinterest or the web for 2 years, the same way there are probably other artists hidden.

I also realized that if someone has a talent (a special gift from the Universe), this has to be honored, so that also other people can receive this gift through his/her work. Every talent or passion need to be shared, because we’re all connected and this sharing of good energy makes the world a better place. This is the native reason of the existance of creativity and art in being human, and probably the main reason why animals don’t.

When we work to be liked from others we can’t reach the goal; but things we do to pleasure ourselves, have always a probability to interest someone. (Marcel Proust)

So the final query is: How is statistically possible that I never came across a work of L.C. for 2 years on the web?! (or, if you prefere: «Google, where were you when I need thee?»)

And here it’s where the Universe reveals his trick: the idea of being the ace in the hole of an “innovative artistic expression” has been the trigger that convinced me to move through every steps. And now, June 216, that I have everything ready and I’ve become aware of what are my desires and mission – only now – I’m damned convinced to go ahead, so excited to experiment all the ideas I received during this 2 years, no matter if I’m unique or not. It’s actually always better being in good company, isn’t it?

Damn Universe… You won: you got a passionate, “penniless Italian artist”, new kid on the block.
I only hope that the saying “fortune favors the bolds” is true.

Thanks Ellen. Thanks Ann. Thanks Ma Chère.
I will do my best to take my pleasure seriously, too.

about, miscellanea
Newer Post Introducing «I wish you» series of greeting cards Older Post Studying how to frame my work…